Transparent backfill in the main bed of a watercourse

When facilities (such as, for example, installations, structures, dikes or embankments of a certain height) are located in the major bed of a watercourse, compensatory measures should be incorporated.

Limits to construction in flood zones

When facilities (such as, for example, installations, structures, dikes or embankments of a certain height) are located in the major bed of a watercourse, compensatory measures should be incorporated.

The compensatory measures must make it possible to restore the flood expansion field impacted by the project and not modify the flow conditions, or at least to interfere as little as possible with the free flow of water.

What is the major bed of a watercourse?

The major bed of the watercourse is the area naturally liable to flooding by the reference flood. The major bed is defined in the Flood Risk Prevention Plans (PPRi).

Construction of a station as part of the Grand Paris Express

In the Grand Paris Express project, 200 km of new rail lines will gradually be brought into service at 68 stations. SNCF Réseau must adapt 29 stations and create a new one to offer travelers easy and fast connections.

SNCF Réseau launched major work in 2017 in the town of Vitry-Sur-Seine in the Paris region.

The future Grand Paris Express station at Les Ardoines will be located west of the railway tracks and south of the existing RER C station.

The connection between the RER C and line 15 South of the Grand Paris Express will be ensured thanks to a new underground passage which will pass under the SNCF tracks and will give access to the side platforms of the RER C.

The existing RER C platforms will be adapted to accommodate the additional travelers expected in the new station: they will be widened, going from 4 m to 10 m in width. They will also be made accessible to people with reduced mobility.

It was at these docks that the Nidaplast RA honeycombs were used as transparent backfill.

2,600 m3 of Nidaplast RA honeycomb blocks were chosen to replace a traditional backfill in order to cancel out the negative impact of this new relief on the natural flow of the Seine during its floods.

Located in the main bed of the watercourse *, the objective of this backfill is to allow the water level to fluctuate in the 95% void (the cells) that make up the honeycomb blocks.

The honeycomb block appeared to be the most suitable product for the project due to its high compressive strength and its ability to drain and store water from the river during its floods.

May 2018: relocation of the underground passage under the railway tracks
June 2018 - January 2019: completion of finishes and accesses
Beginning of 2019: commissioning of the underground passage and removal of the temporary footbridge
October 2018 - August 2019: enlargement and development of the platforms
Horizon 2022: commissioning of the new joint SNCF / Grand Paris Express station 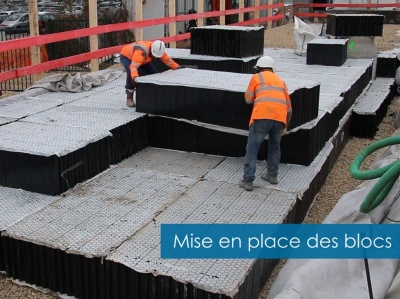